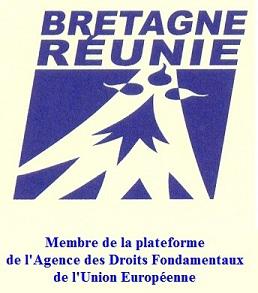 The Breton minority, which lives at the far west of France does resist against the uniformity and normalization, imposed by the French State and some local councillors.

Strong and proud of their belonging to the French and European diversity, Breton men and women will demonstrate on next June 18th, in Nantes, in order to show their willingness to developing their own culture within their eleven centuries old regional area. The long lasting Breton history has created amongst the local people, a strong feeling for their belonging, worrying the centralizing State and the "jacobin" political leaders.

Since the year 850, the Brittany's geographical area has stayed intact, until 30th June 1941, date of the decree promulgation by the "Gouvernement de Vichy," supervised by the nazis, and represented by the "maréchal Pétain", placing the Loire-Atlantique department, the most populated and industrialized from Brittany, to a new technocratic region, so called to day, "Pays de la Loire".

When France was liberated, political leaders committed themselves to cancel that decree in question. 70 years later yet, Brittany is still split, even though a last carried out survey, in March 2009, bears out that 68 % of the Breton population is in favour of reunification. Furthermore, the both directly involved assemblies," Conseil Régional de la Région Administrative Bretagne" and " Conseil Régional de Loire-Atlantique " voted for a vow towards this reunification.

The local territorial authorities reform, led at the end of 2008, as well as the statement of the Président de la République, who stated the anachronism between Nantes, Breton town, still administratively depending on the Pays de la Loire Region, started up an immense hope. When all is said and done, the law brings to light that the reunification is impossible!

Worst of all, the PDL Region and both towns, Nantes and Saint-Nazaire, have kept applying during the last years, a really forced integration policy against the Loire-Atlantique population.

– has launched very propagandas towards the young people, by using the colleges and secondary schools, and also the subsidized sports ;

– has tried destroying the background feeling of the Loire-Atlantique inhabitants, by creating an artificial new identity under the name of "Ligérienne" ( Liger folks!) ;

– has manipulated Unesco, trying to make classify the " Brittany's Dukes' Castle ", in the "Val de Loire ", so as to erase eleven centuries old Breton history.

– goes on changing the names of many streets and block of flats, shopping centers, whose current names refer to the mother region Bretagne ;

– refuses to hang up the Breton flag in front of the town hall ;

– goes on hawking about lies in attempting to oppose the inhabitants from the "Vendée" area to the ones of "Loire-Atlantique", by saying that Nantes town would be half "Vendéenne", half "Breton", when a recent issue of theExpress magazine, shows that our friendly neighbours are only 3,2 % in Nantes ) etc.

– cancels the only one T.V. broadcasting in Breton language ;

– sues car drivers who dare to sticking Breton logos on their car boots etc., the Gendarmes and the Police are ordered to do so!

Nevertheless, Bretons are committed to letting their French citizenship rights as well as their European citizenship Rights to be applied.

The Lisbon Treaty stipulates in its article N° 2:

“The Union is founded on the great values of respect towards the human dignity, freedom, democracy, equality, legislation rightness, as well as the human rights, including the minorities' ones.”

Mrs Viviane Reding, vice-president of the European Commission, confirmed, the present year, that Breton men and Breton women were constituting a Breton Minority.

Faced with the intolerance, even the "Breton phobia" of the French State, as well as of some amongst the elected local leaders, that refuse the recognizing of minorities on their areas, Bretons shout out to the European citizens and their members of parliament in order to stop that discrimination inside Europe.

We do invite all the European Parliament members, who do respect the N° 2 article of the Lisbon Treaty, to vote for restricting laws, assuring the values promoted by the European Union towards its minorities, and consequently backing our next demonstration of June 18th 2011

More information about the protest march of 18th June 2011:

The march will go towards the "Hôtel de Région des Pays de la Loire", in order to make it aware of our commitment, showing that Brittany must not stay split. The route has been studied to go by the monopolistic regional daily newspaper, Ouest France,and also by the French State T.V Channel FR 3, and the University, all of them being accomplices of the forced assimilation.


A free entrance concert will take place in the late afternoon. See the programme and entertainers on (voir le site)